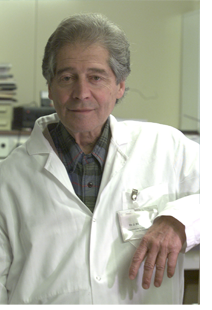 Jacques Benveniste (March 12, 1935–October 3, 2004) was a Doctor of Medicine and a former resident of the Paris Hospital System and research director at the French National Institute for Medical Research. He is known worldwide as a specialist in the mechanisms of allergy and inflammation, and achieved recognition in 1971 by his discovery of Paf (Platelet Activating Factor), a mediator implicated in the mechanisms involved in allergy pathologies (for example, asthma).

In 1984, while working on hypersensitive (allergic) systems, by chance he brought to light the so-called "high dilution phenomenon," which was picked up by the media and labeled "the memory of water."

He discovered certain scientific properties of water which defy explanation by the tenets of mainstream physics. His science, which he calls Digital Biology, is based upon two breakthrough observations that he can prove in experiments that have been duplicated by other scientists:

1. If a substance is diluted in water, the water can carry the memory of that substance even after it has been so diluted that none of the molecules of the original substance remain; and

2. The molecules of any given substance have a spectrum of frequencies that can be digitally recorded with a computer, then played back into untreated water (using an electronic transducer), and when this is done, the new water will act as if the actual substance were physically present.

The applications of Digital Biology are endless. Some of them include digital fertilizers and growth enhancers, detection of contaminating organisms in agriculture, digital pharmaceuticals, digital homeopathics, water analysis and purification, and electromagnetic pesticides.